This update is looking forward to the next wave. Because of that, we cut our list from 15 to the top 10, a group of players we feel pretty confident about in terms of their placement, and instead, have chosen to list a “Next Wave” group of players. To be on this next wave list, players must be competing at the Bantam level or above next season, but cannot be currently in grade 12. As well, players in this “Next Wave,” are those with a shot to be playing at the ‘AA’ level or above next season.

As next season kicks off, many of these players will find their place in our regular top 15 (which we will return to), including a return of several players who were in our January update.

Editors Note: We are always working to develop a comprehensive list. If a player does not exist on our Next Wave list, it does not mean they won’t in the future. It simply means due to the centre they play in, or current level of competition (notably if they are not playing at the ‘A’ or ‘AA’ level in the Bantam age group or below), we have not seen these players compete enough to make a valid assessment.

10. Elizabeth Vanderveeken (Wallaceburg, 1998) – Vanderveeken had a slew of talented forward on her heels for the final spot in our top ten. However, being the only defender in the group, helped the Wallaceburg resident, who captained the WDSS Tartans, and played club for the Windsor Wildcats Midget ‘AA’ team, hold her spot. Possessing a big shot, and a long reach, Vanderveeken, as with any sizeable defender, needs to continue to work on her mobility in the offseason.

Megan Morehouse, seen here with the LKCS Cardinals, is one of the top women’s hockey prospects in Chatham-Kent, and will continue to rise on CKSN’s list next season – Photo by Wyatt Williams/ CKSN.ca

9. Corinna Vandenboorn (Ridgetown, 2000) – Vandenboorn is a wrecking ball on the ice. She uses her size to muscle players off the puck, and is an offensive threat. She’ll have growing pains next season making the step to Midget, but should find a depth role with the ‘AA’ Outlaws, and continue her development.

8. Megan Morehouse (Bothwell, 1999) – Morehouse was front and centre in the Lambton-Kent Cardinals attack this year, and played a supporting role with the Chatham Outlaws ‘AA’ team. Next season, she’ll be counted on to produce for the Outlaws. To continue her development, Morehouse will need to expand her offensive approach. Tricky with the puck in tight, when Morehouse learns to drive wide around her opponents, she’ll score in bunches.

7. Emma Gorski (Wallaceburg, 2001) – Gorski will head to Europe for the second straight summer with the West Coast Selects. Next season, the 2001 goaltender, who is patient in her positioning, and remains big in the net, will enter high school with the CKSS Golden Hawks, and may suit up in Chatham with the Bantam ‘AA’ team. Gorski could likely play Midget ‘AA’ somewhere, however rules may prevent this progression. She is the best netminder in Chatham-Kent right now in her age group or older, with youngster Jesse McPherson nipping at her heels in the age group below. 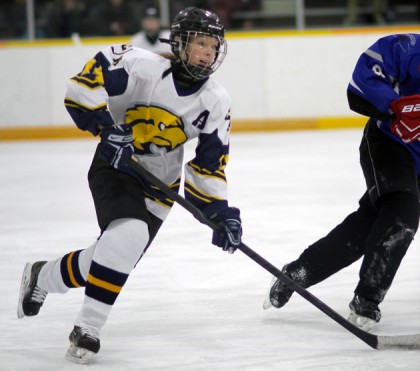 Sydney Sabourin, seen here with the CKSS Golden Hawks, was the top climber on CKSN’s list this season – Photo by Kelsey Vermeersch/ CKSN.ca

6. Sydney Sabourin (Chatham, 1999) – No player on this list saw the second half improvement of Sabourin. While still waiting her turn to be the go to player on Chatham’s Midget ‘AA’ roster, an opportunity which will come next season, Sabourin was one of the most dominant players in the LKSSAA high school loop, controlling the puck and the play when she stepped on the ice, even against the areas top competition. She scored at more than a point per game pace at the high school level this season with 21 points in 20 games, and is primed for a big season next year. Her dedication to off ice training will pay dividends in the year to come, and showed in her puck possession game in the latter half of the year. A PWHL team would be wise to give her an opportunity to develop next year.

5. Kaitlyn Isaac (Wallaceburg, 2001) – Back for her second tour of Europe this summer with the West Coast Selects, Isaac can skate through the opposition, and is a constant offensive threat. Choosing Wallaceburg for high school next year, Isaac may not have a team to play for at that level. She will likely land in either Chatham or Sarnia for her second season of Bantam ‘AA’, but could crack a midget ‘AA’ team in the right centre.

4. Maddy Lalonde (Blenheim, 1998) – No player scored as much as Lalonde in the LKSSAA high school loop this season. Her line, which featured #3 Nicholson, and #2 Baker, dominated. Although Lalonde may have been the less noticeable of the three, a glance at the scoresheet proves she quietly contributes each and every game. After biding her time with Chatham’s Midget ‘AA’ entry the last two seasons, she will play in the PWHL next year, and draw the attention of college programs on both sides of the border. 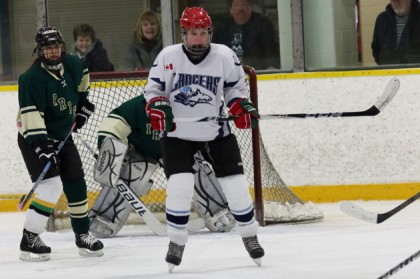 3. Lauren Nicholson (Dresden, 1998) – Bullish and physically dominant, with a scoring touch. Nicholson is hands down stronger than the competition, and being surrounded by Lalonde at the ‘AA’ and high school level, and Baker with the UCC Lancers, she’s had the chance to work with and develop alongside other talented players. Nicholson could have been in the PWHL this season, and will move to the province’s top league next year, where she’s expected to make an immediate impact. Her off ice work will allow her to remain a physically imposing player.

2. Sydnee Baker (Chatham, 1998) – With a season of PWHL action in London under her belt, and a five-foot-ten frame in tow, Baker will be one of the hottest recruits entering her grade 12 year. Baker played high school hockey for the UCC Lancers, and was a catalyst on her line, creating space for Nicholson and Lalonde, utilizing her size to play a puck control game. Increased production in her second PWHL season will ramp up NCAA interest in Baker.

1. Katreena Whiteye (Moraviantown, 1999) – One of the top scorers on the PWHL’s Bluewater Hawks this season, Whiteye will likely be one of the league’s top offensive threats next season. Not as effective at the high school level as some below her on this list, Whiteye, who will enter grade 11 next season, has the benefit of added time. Committed to her off ice training with Athletes Fuel, similar to the majority of this list, Whiteye, will be a top NCAA recruit.