The first leg of the Mark Austin Pacing series is in the books at Dresden Raceway. 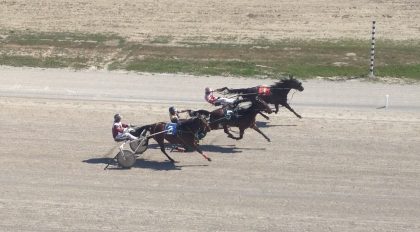 PULL THE SHADE took top prize in the fourth division of the Mark Austin series.

STEP IN MY GROOVE and Nick Steward went wire-to wire to capture the first division of NW of One Race or $5,000 Lifetime (FM $6,000) series. The four year-old Rambaran gelding stepped off fractions of 29.1, 1:00, 1:30.2 for a time of 2:00.4 for owner-trainer Leon Mansfield of Strathroy and partner Antonia Smith.

MY GREEK PRINCESS finished second for Tyler Borth while YOU SAID IT and Lorne House finished third.

The second division of the series saw BIG BAD CARLY and Tyler Borth hit the winner’s circle in 2:03 after chasing down CRJ HOTTIE and Donnie Rankin.

ACTION TOWN, a three-year-old Mister Big gelding, and Rankin went to the front and never looked back in the third division for owner Ken Sommer of Sheffield, Ohio in 2:02.4. Mark Williams guided GOT IT MADE to a second place finish while THRILLER NIGHT and Garrett Rooney paid on the show ticket.

Rooney and PULL THE SHADE took top prize in the fourth division of the Mark Austin series after cutting the mile and holding on for the win by a head over ABITOFALRIGHT and Williams. The three-year-old Dragon Again filly paced the mile in 2:00.4 for owner Sheri Abbot of Windsor and trainer Steve Roberts. ALYSSA MARIE and Alex Lilley were third.