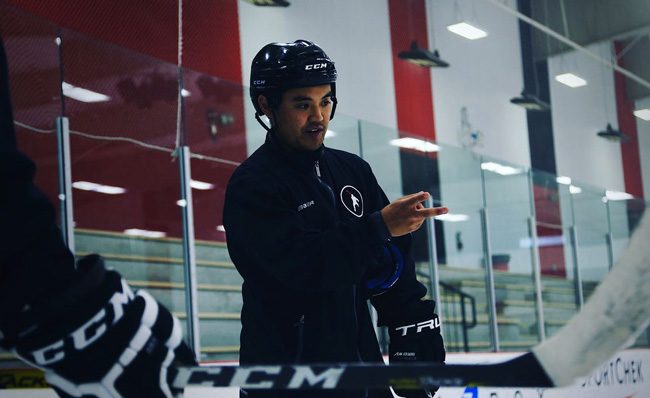 Kyle Nishizaki in his role with Perfect Skating

Chatham native and former Jr. Maroon Kyle Nishizaki has been tagged to run the show at leading edge on-ice movement company Perfect Skating in Ottawa. Perfect Skating was founded by former professional hockey player Shawn Allard, who has quickly become a pioneer in the NHL Movement and Skill Industry. His prominence in the industry began while working with now retired NHL player Mike Fisher, and that translated into a role as the Skating and Skills coach with the Nashville Predators. Allard is currently in a similar role with the Colorado Avalanche.

With Allard working in the National Hockey League, and away from Ottawa for much of the time, he named Nishizaki to the role of Director and run the many programs that Perfect Skating delivers throughout the year. It has been an exciting and busy transition for the former Windsor Lancer captain.

“It’s been really exciting and fun, we just finished the Octagon Camp in Montreal and we are gearing up for more summer programs. We are also developing franchising as well so it’s a busy time all around” Nishizaki said over the phone. He seems excited about the new opportunity.

“With Shawn in Colorado, I had been managing the on-ice programs for the most part and now I will have some responsibility on the business side as well.”

Nishizaki is up at 5:30am, on the ice for at least four hours a day, and fills the rest of the time planning programs, filling programs and answering emails on all things Perfect Skating. If you look at what Shawn has to say about NIshizaki, it is clear why he groomed him for the job.

Kyle is truly what the PS Coaching Opportunity is all about. He has this insatiable desire to stretch, to work and to get better every day. Over the past 5 years he has turned into one of the world’s top development coaches, his likeable, fun personality connect with athletes and his ability to identify asymmetry production is truly elite.”

Allard developed a very new and innovative approach to skating instruction, with “flow” and “the best skaters move the best”, clear in their methodology. Skating has never been strictly about getting from A to B in a straight line. It’s cutting and leaning and stopping and pivoting, all in a nice flow. Perfect Skating programs are designed to tap into that flow needed to navigate the tight spots of the game. Ask Mitch Marner or Patrick Kane how to shake Zdeno Chara, or Shea Weber bearing down on you in the corner with a means of making your nose a part of the shiny glass, and Perfect Skating will give you a fighting chance.

It is a busy time for Nishizaki, who played for the Jr. Maroons for five season from 2002-2007 and was a part of two Western Junior B. League Championship teams. Along with the move to Director, he is set to get married next summer to Kelly Meincke, The ceremony will be in the Soo and they have been busy with and are nicely ahead in the planning.

You play junior hockey in Chatham and then University hockey in Windsor you have a great foundation and way in life. It won’t be long before Nishizaki, who has a house right outside Ottawa in Kanata is married and on to the next big chapter in his life. He is certainly well on his way and well deserving. He is a long time Leafs fan but also follows the hometown Senators after working at the games for a few years. I asked him for a comment on the additions to the Sens roster.

“I think on paper, what the Sens have done makes them a better team in the short term for sure. They have a lot of talent up front and a lot of younger guys that have to develop for the near future but I like what they have added on the blue line in terms of experience.”

It is always great catching up with Chatham-Kent athletes and in this case it just so happens that he is family. The Soo doesn’t realize what’s coming next summer!